This system allows you to be a little more precise with your adapter setup. There’s a more narrow adapter, normal adapter and a wider adapter height, which is my favorite because it allows the widest carve. The wider setup is fun for bowls and hills. The more narrow setup is also fun for bowls and hills. You can’t loose your gonna love this. If your like me and you appreciate how and adapter can compliment just about any board setup, then you will benefit from having this fin system. It helps you be a bit more creative/precise with your choice of surfskate setup. I slap this baby on a wooden plank and I shred bowls harder than I ever have before. 5 stars no doubt.

A
Alex Langston
The Alpha and Omega of Surfskates

I preordered the FIN system when it was in beta testing, and I really love it. If you're coming from another surfskate and getting the rail adapter, this will be a pretty unique setup. Most people don't see how dope it actually is.

My front adapter is in the "supercarve" config on a Loaded Poke, rail adapter in the rear. 92a bushings in my paris v3 trucks and 90a riptide fatcones on the board side of the road adapter because I'm heavier. This setup allows for a whole extra dimension of customization above other surfskates with the rear adapter. It should've been my first surfskate, because I would've stopped here (And I am. There's no reason to spend 250-400 on a yow when this exists.)

The bushing based adapter feels good, I like the constant bit of tension while turning and the lack of spring takes away all my worries about rust. The lean of the stock bushings in the rear was way too much, but w/ the fatcones i mentioned it's perfect. You don't get that rear lean on any other setup, especially CX or Slide, other trucks at this price point.

Here's the quirks: My front adapter washer bent when over tightened, like I saw someone else say. The bolt may be a bit too short, because I wanted to tighten until the nut was 100% flush, but some blue loctite would've made it secure if I'd let it stick out. I also could've just paid attention and not done overtightened.

You have to use flat head/countersunk bolts w/ this adapter to go into supercarve mode. My loaded button heads scratched up the adapter because they stuck up like 2mm too much. The stock flat head bolts aren't long enough to include a thing dampener, so i need to figure out a new bolt situation. The ride is a little less cushy on 83a wheels than I'd like, so I want to add a tiny bit of softness somewhere. Height honestly isn't an issue because it's like maybe a 1/4" taller than my other surfskates. It's just something that comes w/ real surfskates.

More importantly, I'd like to see WB sell 3 duros of bushings in the rear adapter. 85a white being the softest, then going up from there to 88a and 92a to accommodate heavier riders. The design of the rear adapter doesn't compress standard bushings the way a truck would (it's flat w/ no sunken seat). Treat bushings for the rear adapter as a few points of duro softer than you'd use in a truck. I used fatcones because they've got more thane for that extra support, meaning i didn't have to use 95's back there and I still get a bit softer ride in the rear (and that's really what we all want, right? Softer ride in the rear). The adjustments to the rear are critical w/ the FIN system because it can be used for different purposes. Part of this is just the customer base learning we can experiment w/ bushings on our own, and that it's not going to work like a truck because of the geometry.

I think it's more relevant here because the FIN has different modes. Riders would save 15-30 bucks on 3rd party bushings if WB had 2 harder options. That's the real reason I knocked off one star. There's a bit of learning for me coming from Slide/Aquilo/CX when setting up a WB, so I chock the rest up to user error. The included rail adapter bushings were basically useless for me out of the box at 85a. One of the common complaints you'll hear about WB is the amount of lean w/ the adapter. Harder/fatter bushings = less lean = more satisfied customers.

Personally, this is amazing. I race and do long cruises on my eboard. I rocked the normal Surf Adapter with the riser but when I got word of this FIN system, I had to try it.

Immediately as soon as I got it, I threw it on the super carver mode and went to town. I thoroughly enjoyed my sharper turns and being able to carve as sharp as I can. While racing I was able to make amazing turns super easily. Helped a lot when I needed it.

The 3D printed Fin part as A Beta is plastic and kinda sketch because of how much weight I put in it but I know the final product will me aluminum so I’m happy to say it will be all good.

Other than that, the super pump mode on an eboard doesn’t really work due to all the weight. Yet, I will say, that’s not the purpose of it for eboards. It’s more for stability at super high speeds. I was able to downhill on my esk8 in the super pump mode going around 40-50mph. Felt smooth as butter. Just stiffen the back like crazy of course. It’s downhilling :/

Overall, I love this product and can see it going places. When the final product with the aluminum FINs comes out, I’m snagging that! I believe surfing while esk8ing is the way to go! Especially with the FIN. 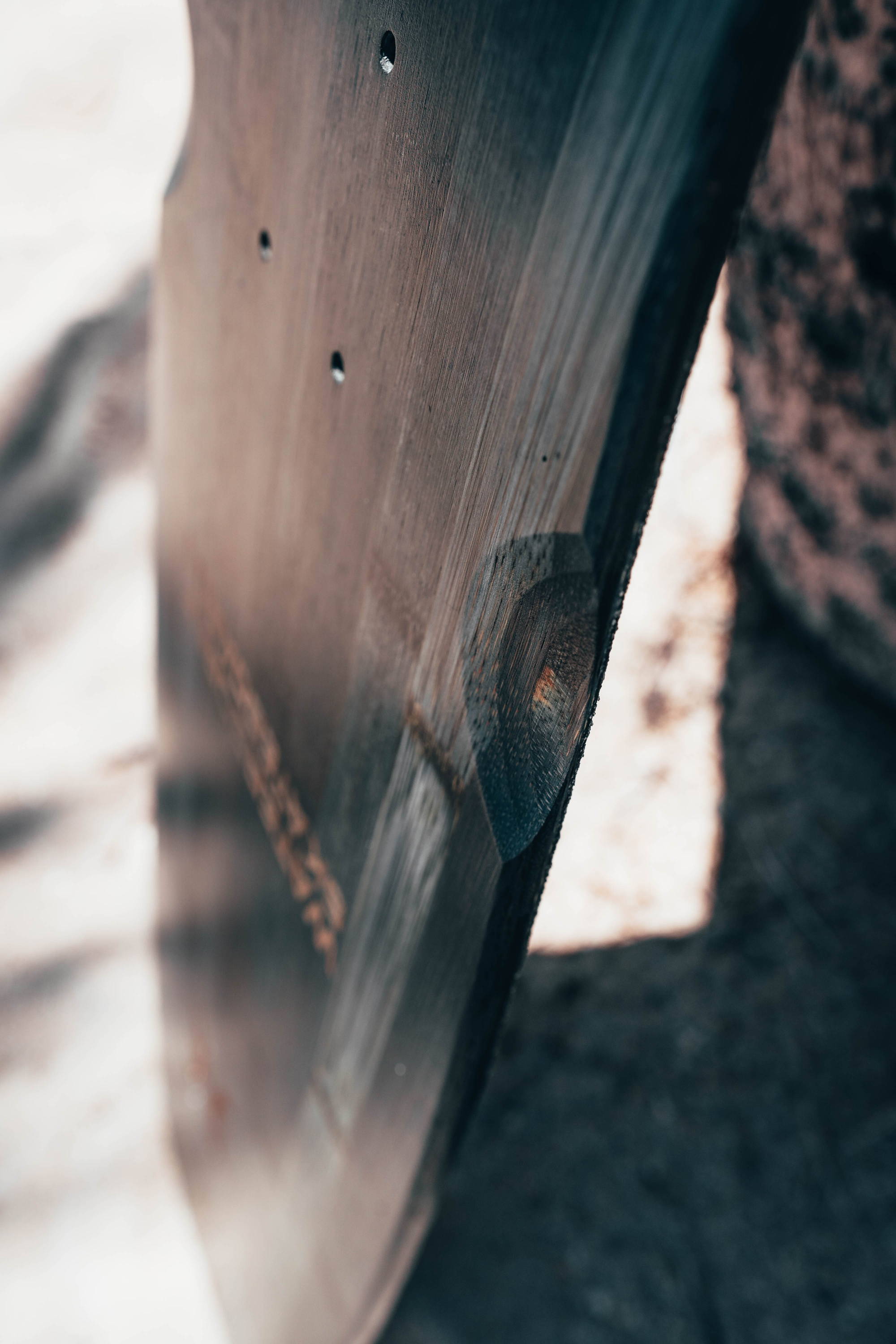 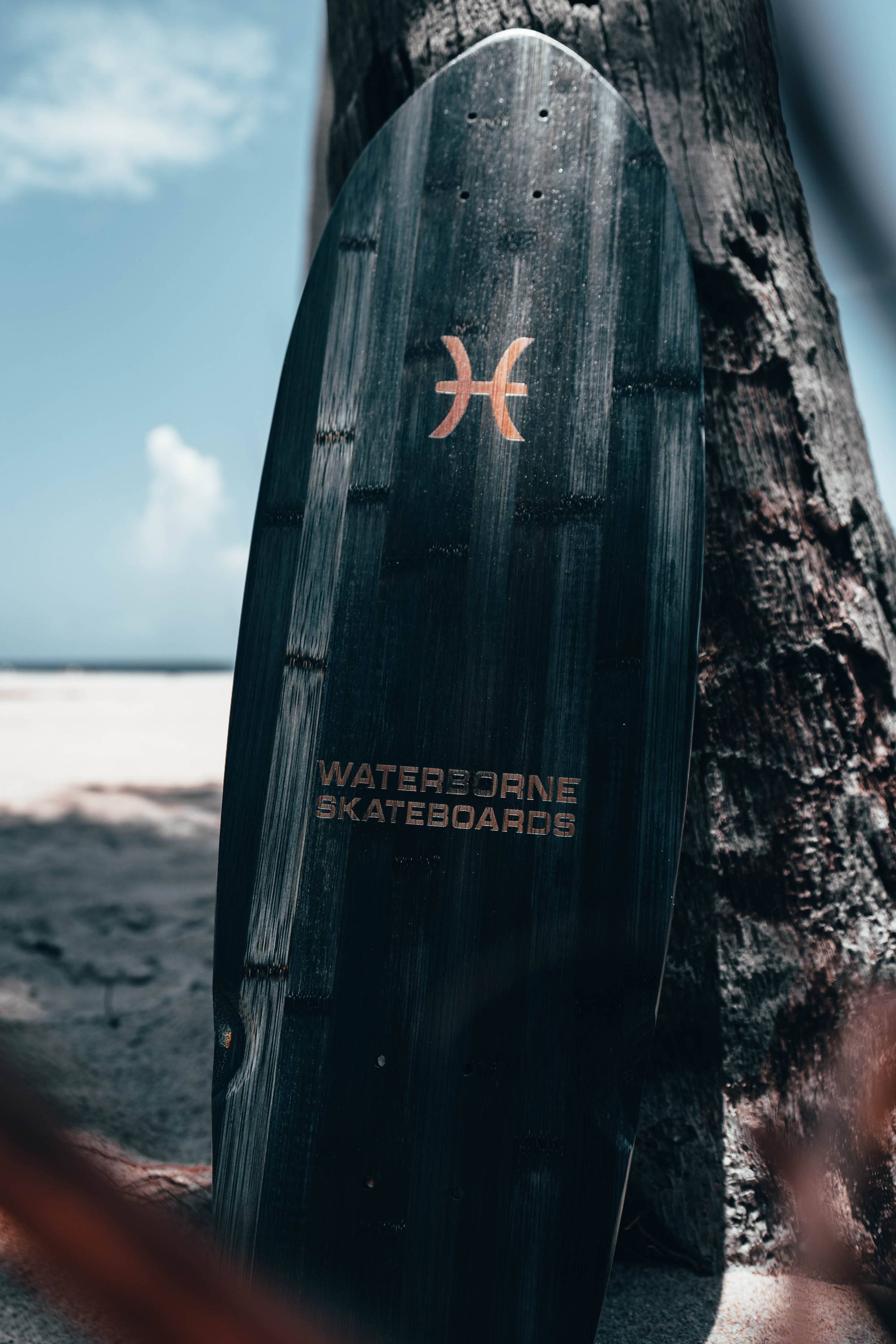 LET THE MATERIALS SPEAK FOR THEMSELVES

Waterborne Black Bamboo is made by bathing fast growing bamboo in natural dye for 3 days. This allows the material time to soak in its new signature color, all the way to its core. The color will not be taken away by scratches, razor tail, or sun fade. Where other decks are maple wood sandwiched with bamboo venire, Waterborne Black Bamboo decks are 100% bamboo, and extremely robust! 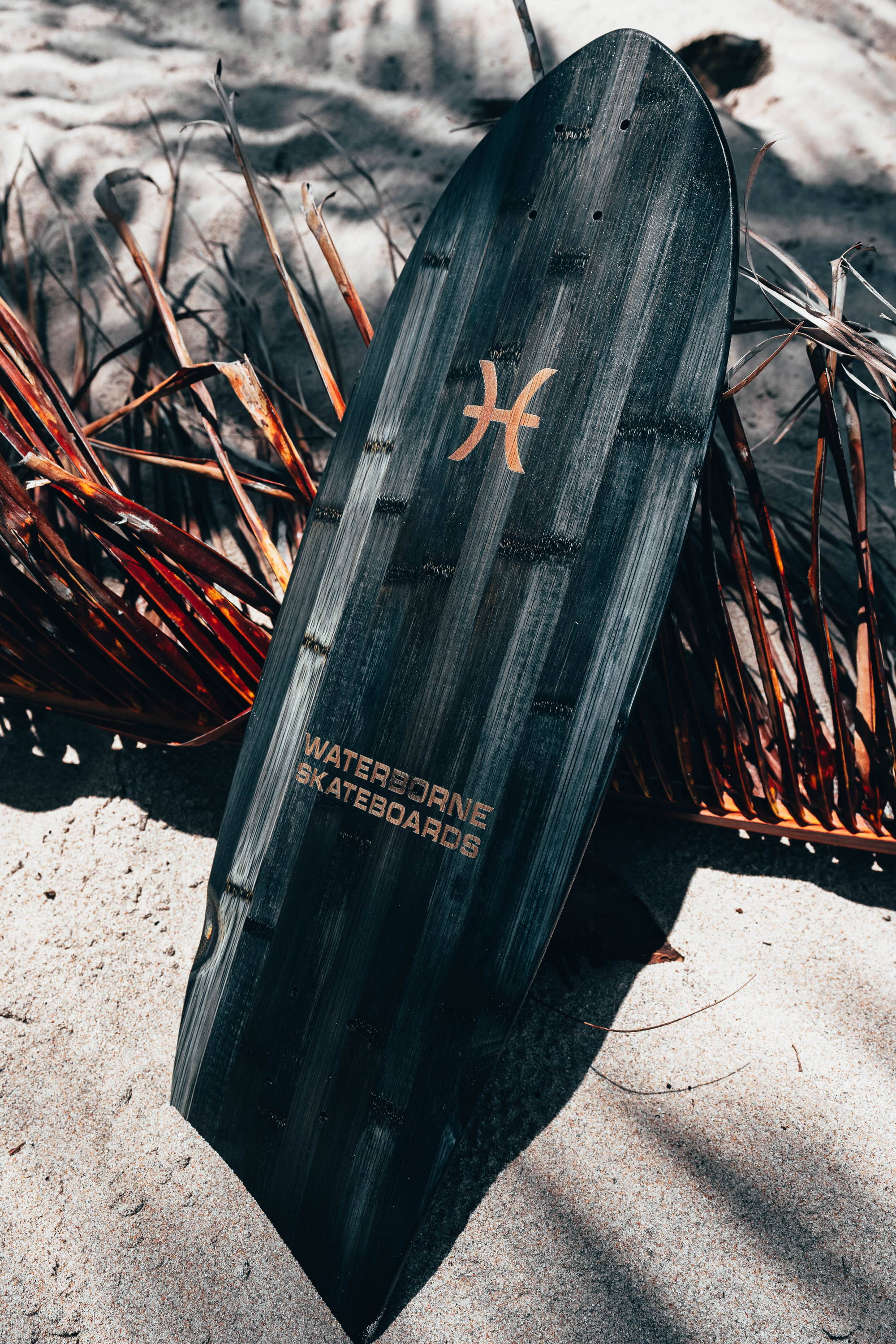 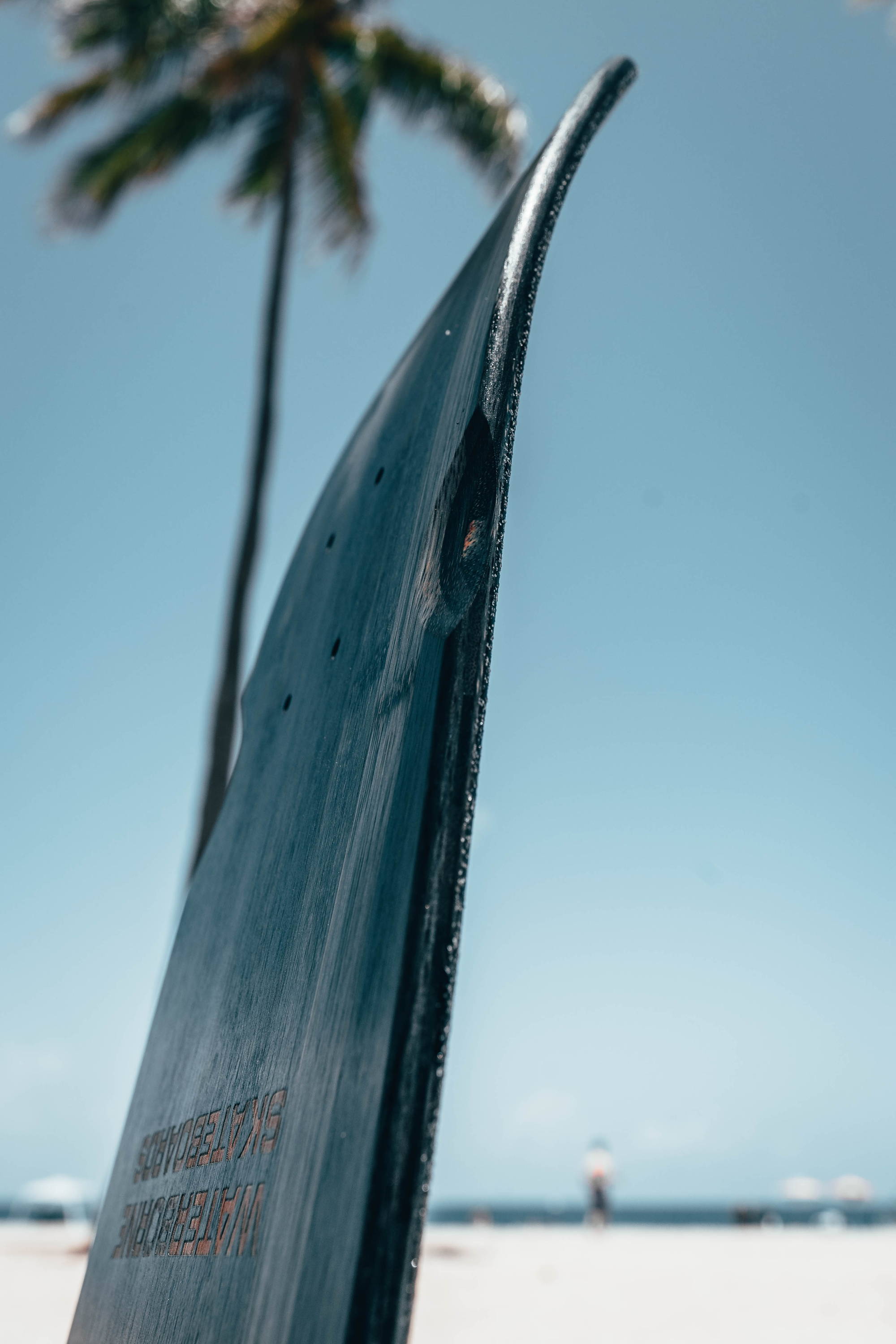 LEO Black Bamboo Surfskate feels at home carving the boardwalk as much as it does riding ramps and bowls at the skatepark.

PISCES High Performance cruiser can effortlessly pump long distances thanks to its rear truck's Rail Adapter. It can zip through your town, local park, or campus with ease. 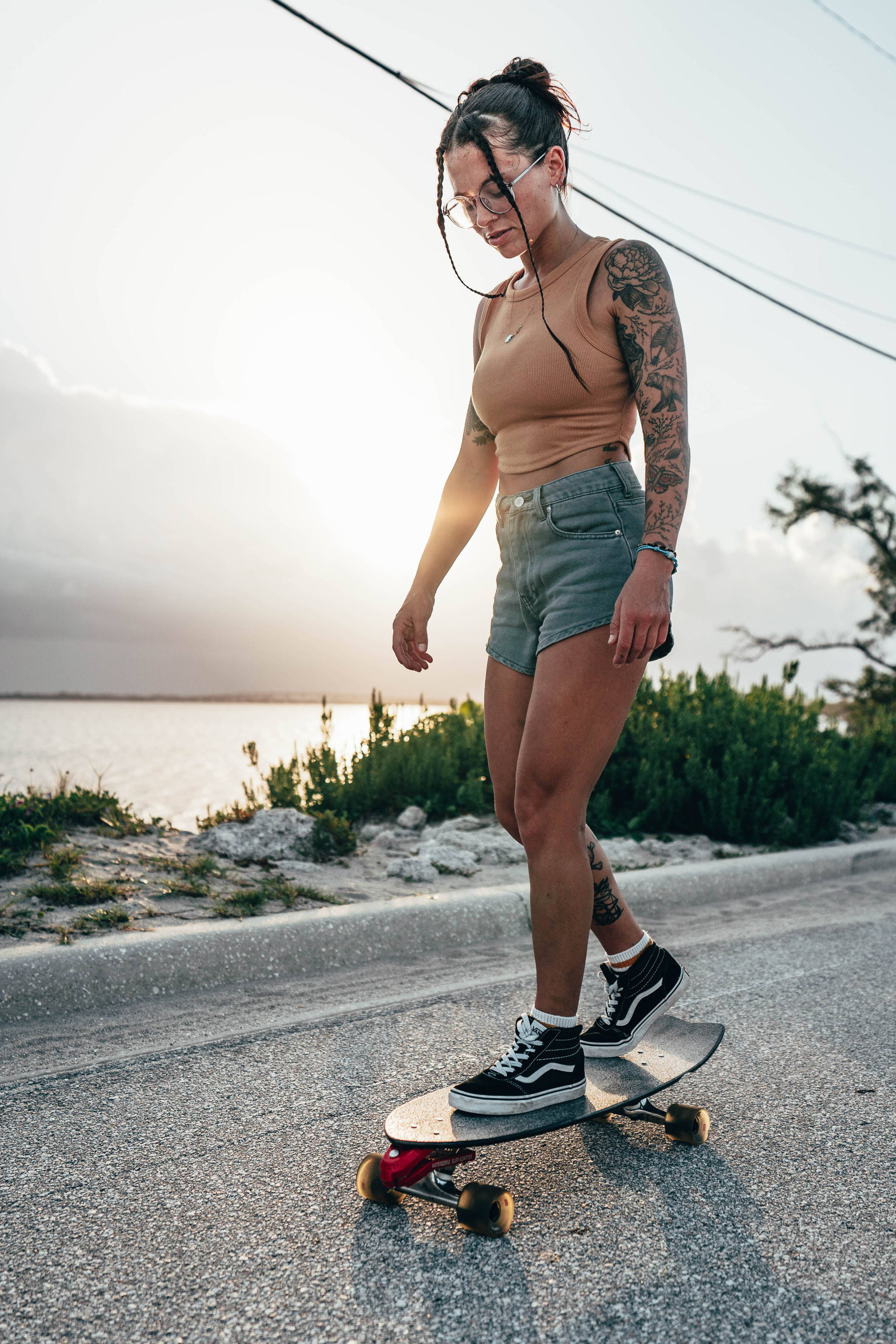 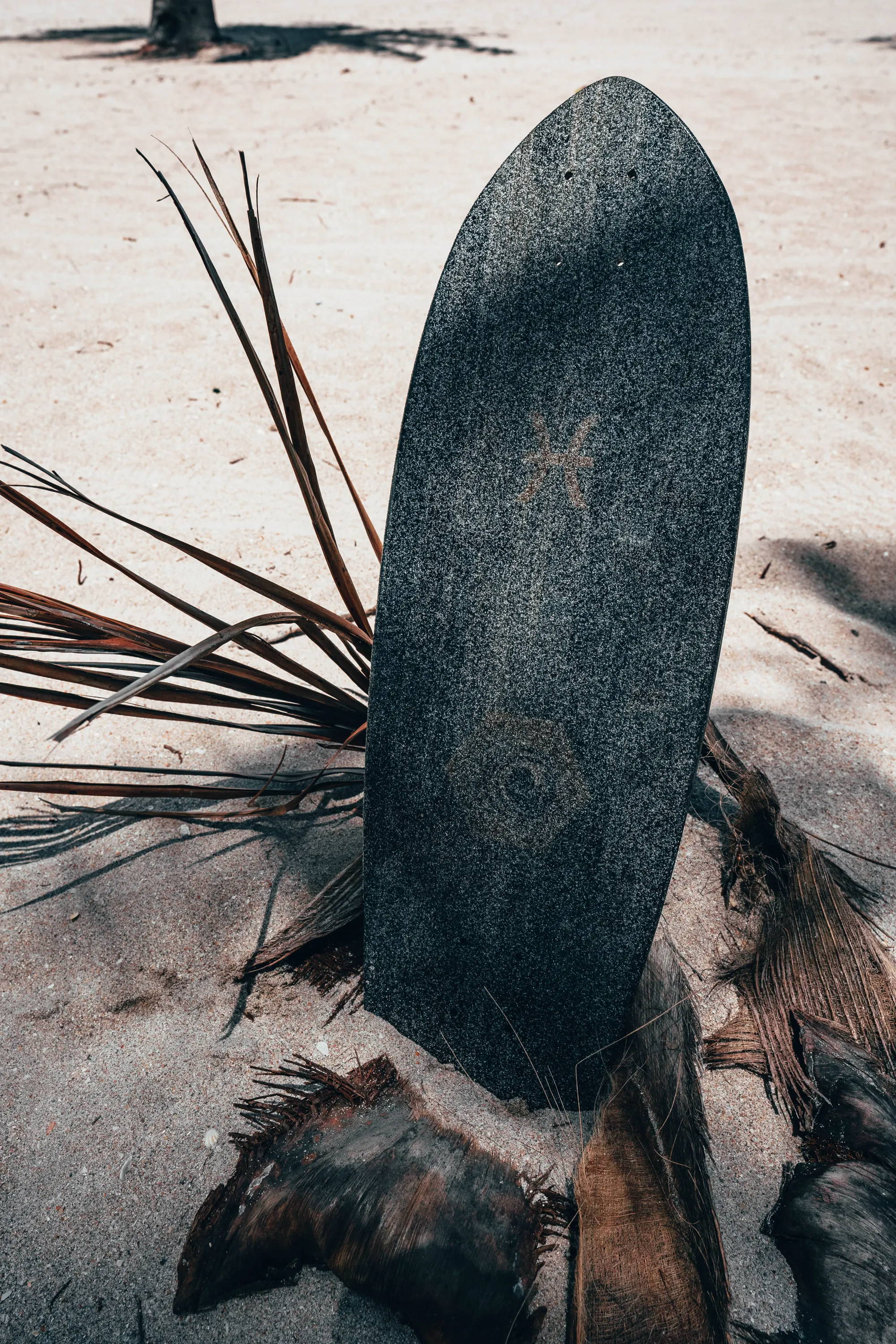 Our clear-coat griptape is made from 100%

recycled glass. The glass is crushed down to

a consistent grain size, and then tumbled

to take the edges off. It is then sprayed

onto our Black Bamboo decks for ideal

is a shaped street deck with a kick in the nose and tail. The familiar deck makes this a great cross over board for anybody who has a background in park or street skating, and has taken an interest in Surfstyle. Lean hard onto your toes or heels, drop a hand onto the ground, and let the LEO wrap a tight circle around you.

We decided to make two surfskates with a classic design, quality feel, and modern style.

is a High Performance take on the cruiser board. The deck shape will be familiar to anybody who's ripped a cruiser through a college campus, across a beach town, or flown down a traffic-free mountain road. The twist on the PISCES is the Rail Adapter on the rear, which enables a much higher ceiling for carving speed. 15mph is the money zone on this board.

Our new 2022 urethane formula is a softer wheel and a harder core with the balance of the wheel leaning slightly more towards grip. The rounded edges allow these wheels to grab the ground more gradually after forcing them into a slide so they do not upset the balance of your board.

Bearings are often a detail that go overlooked in the design of a skateboard. However, these bearings and their packaging were developed to make the most difference in the feel of your board, yet create the least ecological impact.

All Waterborne Skateboards genuine products are guaranteed to perform through their lifetime. Surf and Rail Adapter Aluminum parts and kingpins are guaranteed never to fail under normal usage. Irregular usage is defined by performing high impact maneuvers, riding over 20mph, or riding while heavier than 250 lbs. Bushings are guaranteed against tearing for 2 years and properly maintained Surf Adapter bearings should last 1 year. If you have any questions or claims about one of our products please contact customer support here: support@waterborneskateboards.freshdesk.com

Sign up to get the latest on sales, new releases and more…